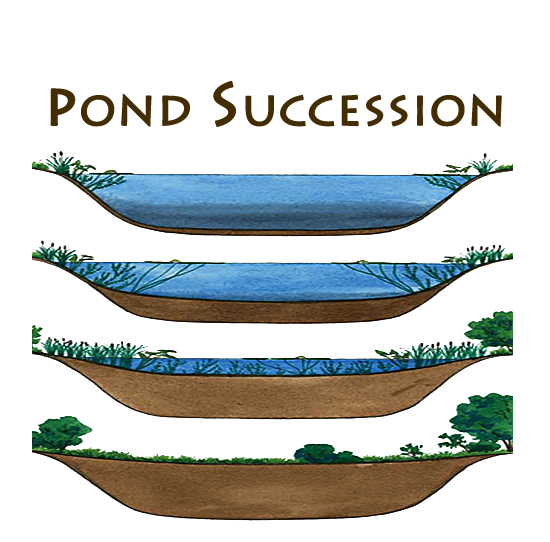 Not widely known is that most prairies and forests start as water retention pools also known as ponds. When a water filled hole in a landscape fills,  the “4 layers of life” balance the pond and maintain it for several hundred years (learn more).

After many years silts from decaying organic matter start to fill the pond. If left alone and not cleaned, the debris will elevate the pond floor close to the water’s surface. When this happens amphibious species in both the animal and plant kingdoms become abundant and after a while when the pond is almost completely filled  in with vegetation, decayed organic matter, and silts the pond takes the leap into it’s next succession and changes into a wetland called a marsh.

Much time later, trees start to emerge as the dominant species (often willows, silver maples, cottonwoods, and bald cypress) and the marsh then succeeds to another form of wetland that is dominated by trees known as a swamp. Swamps are the richest life regions on earth, and any wetland (marsh or swamp) can be somewhat easily converted into the most productive regenerative/sustainable agriculture system known to man called chinampas.

After many years the swamp fills in and turns into what we call a meadow and at this stage large herding animals are typically introduced by nature to continue the succession.

The further along in time we go and depending on climatic factors the meadow takes it apex shape as prairie or forest. This gets me thinking of the life we are seeding with the invention of the modern day back yard swimming pool.

Permaculture Tip of the Day - Where is the Nitrogen in Legumes?