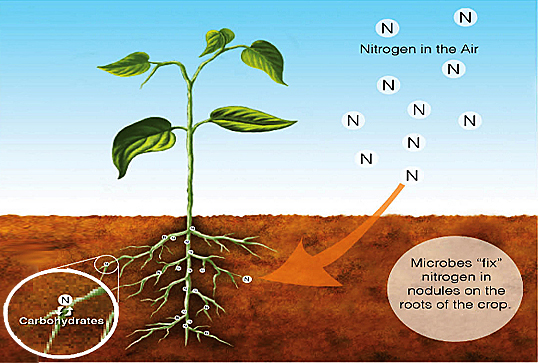 Nitrogen fixation, to say the least, is COOL! The design of nature that allows for bacteria to symbiotically align with legumes, and some other species, to deliver atmospheric nitrogen into the soil is a blueprint for the next phase of the long term food supply for humans. When we combine a technique called chop and drop (which is when we go in with a sharp tool and chop branches and greenery off of a legume to lay it upon the soil) we can then work the plants to provide nutrition to the soil which in turn gives it back to the productive food bearing species.

The parts of legumes that store the most nitrogen:

Seeds – The most abundant storehouse of nitrogen in a legume is in it’s seed.

Pods – The parts of the cocoon that hold the seed is called the pod and these make superior mulches if you can get enough. The prosopis (often called the mesquite tree) produces at great numbers large chunky seed pods. The pod is second place in the amount of stored up nitrogen in a legume.

Leaves – Leaves hold an abundance of trace elements and are the third in the hierarchy of nitrogen storage. A leguminous tree such as Albizia julibrissin (also called the mimosa or silk tree) is an excellent resource in most climates for both large chunky seed pods and a plethora of biomass from both leave and twig growth.

Wood/Stem – Any species in the leguminous family make great for hugelkulture (the storing of woody material beneath the soil for water and nutrient capture). Some acacias take longer to grow than others which in turn makes their woody material dense and longer to break down. The woody material in a legume is the fourth place in the amount of stored up nitrogen.

Permaculture Tip of the Day - The 4 Layers of a Pond

Permaculture Tip of the Day - Evolution of a Pond