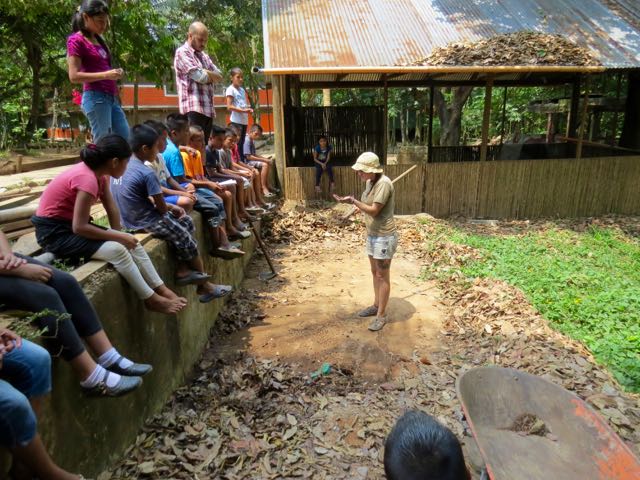 It had been several months of being in touch with Heather, the director of Casa Guatemala, before my wife Emma and I finally visited the once orphanage turned school, a sort of haven for children from impoverished families in which parents can’t afford to support them. Otherwise, daytime students commute from surrounding villages to take advantage of the better quality education on offer, as well as a free meal and snacks throughout throughout the day.
Heather had invited us to do a permaculture project, and we were visiting to assess the site for a good place. From the pier (Casa Guatemala is on the Rio Dulce in the southeastern reaches of Guatemala), we passed the children’s and teachers’ dormitories, cafeteria, and school buildings, after which the jungle began to become more prevalent. However, there was lots more to see.
The Assessment

Permaculturally (a new word) speaking, hundreds of fruit trees had been planted around the property over a quarter of a century ago, and there were several ponds, the remains of an old and aquaponics systems. There was also an abandoned hydroponics setup, pig stalls with a few residents, and the ruins of a discontinued chicken-and-egg operation. Far, far into the property, beyond the volunteer housing and even the groundskeepers house, there was a thick patch of pineapples and a rather parched attempt at a vegetable garden, though with a few drought resistant pigeon peas and moringa plants hanging in there.
After the tour, our first inclination was that there was too much distance between the food and kitchen. There were lots of vacant spots between the school buildings, dormitories and play areas. We thought that this patchwork might function well as a Zone 1 gardening space, using the school cafeteria as the centerpiece. The teachers had been attempting agriculture classes, but they had struggled to produce much using the classic plow and bare soil methodology. In other words, it seemed a great opportunity to show some alternative techniques.
Observation/Information

We stayed on site for a couple of days to walk around and get a feel for how things worked. Erosion was a massive issue. Even so, often multiple times a day, the kids “cleaned”, or raked, the ground clean of leaves, discarding them into the fringe areas. In other places, they were burned. Any remnants of top soil had long since been washed away in the heavy rains, and even now the subsoil was disappearing one rake scrape at a time.
Additionally, some of the sites we’d picked as possible gardens proved poor choices. Once we were able to walk around with someone who explained rainy season waterlines, we scratched off some spots that flooded each year. We also got to witness the kids playing and noticed where soccer balls frequently fly on errant kicks, as well as common areas for other activities.
The Revamped Project

Compost bins seemed a basic necessity as food scraps are regularly coming in from a restaurant (the financially attached Backpackers Hostel) in the nearby town, an abundance of leaves and other organic debris is cleaned up daily, and a there is a desperate need for fertile soil. The pigs eat much of the scraps, and the rest of which is thrown into an unusable, as it is littered with trash, “compost” heap. We found a great spot with a concrete wall and foundation but no structure or apparent purpose, right on the route where the food scraps pass every day. We’d start with a simple cold compost system with minimal turning (so as not to give an understaffed organization more work).
We also chose a starting spot, still very near the kitchen but clear of play areas, for the garden. It catches daily overflow from a water tank and has a slope well-suited for water harvesting with swales and/or terraces. There are some trees providing shade, a good thing in the heat of Rio Dulce. As with the rest of the Zone 1 area, the earth is largely blank and barren. The soil is dead and what remains is disappearing daily in a mix of raking, overflow, and—coming soon—another rainy season. We decided that, instead of making a few pretty garden beds, it might be better to begin reinvigorating this space by building soil and pacifying the water flow, demonstrating land stewardship rather than installing raised beds.
And, there were a couple of more things we had in mind. The state of the pig stalls—small concrete and metal living conditions which the animals never left—had been disconcerting, a fact that Heather had also mentioned herself, so we wanted to work on getting them some space to roam outside. As well, near the garden spot was the foundation of an old building which we were hoping to convert into the beginnings of greenhouse, somewhere to get seedlings going, which might work better for the agriculture classes than planting in the ground had.
Installing the Systems

We started with the compost bins. On day one of working, unbeknownst to us, we were joined by the agricultural classes. They helped us dig up a layer of amazingly decent soil off the concrete slab, filter it of rubbish (there is the interesting issue of both valuable leaves and plastic refuse being called “basura”, Spanish for rubbish), and gather materials to build the bins. The first go-round was a series of bins with bamboo walls, but it just wasn’t stable. Luckily, there were plenty of wood scraps on hand, and we easily rebuilt the system to be stronger. It consists of three composting bins and a separate leaf (to use for covering the food scraps) collection area.
The soil rebuilding and water catchment garden took the bulk of our three weeks there. Due to a lack of soil and an abundance of organic matter, we developed a system of terracing in which we installed a berm/ dam, uphill of which we designated a spot to pile leaves, sticks and grass clippings (instead of throwing them away or burning them). The curled dams pacified the flow of water and spread it over the landscape, hydrating the dried out earth and congregating beneath the piles of organic material until they can breakdown into soil. The paths between terraces were covered with stones that had been cleared out of the now defunct hydroponics beds.
The greenhouse was a quick-fix type of project. Using an old door and scrap wood, we pieced together a table, and with some discarded netting, we built a cover for it to help with heavy rains, troublesome insect, and interference from various other animals and the abundant human toddlers in the area. We started a few things, including pigeon peas, edible hibiscus, and mustard to put in the dams (and we also transplanted lots of lemongrass and sticks of madre de cacao, a nitrogen-fixing legume, as well as included a moringa tree). From what we discovered when making the compost bins, we sifted out a great heap of quality potting soil.
An Influence

The staff at Casa Guatemala immediately began addressing the pig issue… They — pushed by Heather — agreed, and they decided to fence a huge area for the pigs to roam during the day. The space had plenty of fruit trees to drop a little fodder, and the fence was constructed from old pallets. The first day the pigs were released, all of the volunteers, who look after the kids in non-school hours, were smiling and thanking us. Turns out, they’d all been bothered as well. The best part, though, was that we hadn’t done a thing really. We’d just mentioned the need, and the staff had done all the planning and work.
Otherwise, as with most visitors, we were a serious point of curiosity and interest. After nearly a solid week of answering—several time per child — “Como te llamas?” (What’s your name?), we got to start answering “Que estan haciendo?” (What are you making?). They were both interested and perplexed at the two gringos walking around with gathering a wheelbarrows of “basura” (the leaf kind) to put right back on the area they’d raked no so long ago. But, slowly the word spread, and the concept garnered some followers. The teachers even decided to revamp their whole garden using our mulching method, and several folks from the nearby village complimented our work, finishing our sentences for us as we explained how are system worked. They already understood that leaves were the future soil, but somehow the need to clean it all away had taken precedence. It seemed that that might start changing.
Of course, the systems remain imperfect. The compost bins were only being used sparingly as we left. The kids were still raking up and throwing organic matter elsewhere, despite our efforts to always have them put their leaves in the garden. And, even the pigs, after a day of freedom, spent the next couple pinned up because they’d been difficult to get back into the stalls. But, as we finished phase one of the permaculture project, we pointed out these things and made sure that the teachers, students and directors all knew that the gardens and the future now belonged to them. We were leaving, and these things were in their hands now.
A Phase Two?

Having worked on many projects and devoted months of labor only to see our efforts fall into disrepair, we intentionally limited the extent to which would take our initial project at Casa Guatemala. We’ve promised to visit again soon to check on the progress and adaptation of the systems we’ve introduced, all aspects that the staff had agreed to and wanted. If the systems have been maintained and developed, we hope to do a phase two and beyond.
In the meantime, however, Casa Guatemala is now very interested in further developing the site using permaculture ethics, principles, and techniques. They accept volunteers year-round, asking only for a one-time donation of 300 USD in order to support the school, which has professional teachers and supplies lunch and snacks for all students, as well as breakfast and dinner for the 100-plus children living there fulltime. Volunteering includes housing and basic staple meals three times a day. Heather hopes to find an experienced practitioner with some Spanish skills to help with the permaculture project, and Emma and I will also be in Guatemala to provide support via sharing knowledge, resources, and connections.
For more information, visit Casa Guatemala’s website or apply to volunteer.

Permaculture Tip of the Day – Dehydrating Food with Hot Water