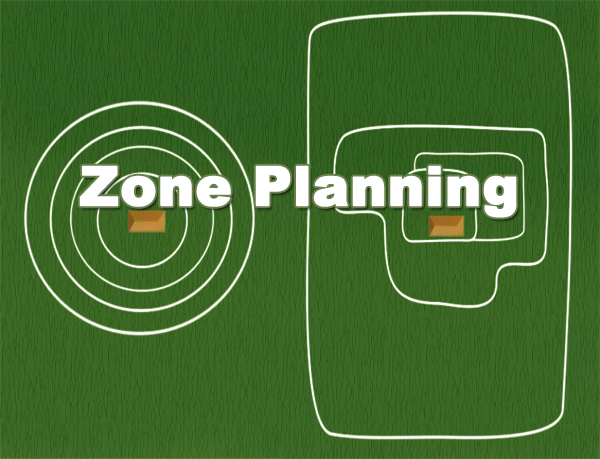 Permaculture really shines when it comes to the practical placement of elements in a holistic design. Permaculturists are taught a wide variety of methods of design, and utilized often, is zone planning. Zone planning makes the idea of time – and – arrangements of elements in your design make sense for use. Zoning starts from zone O (which is the place of living) and goes to zone 5 (which is the natural, not visited often, ecosystem that is usually left alone).

The graphic above shows two examples of zone planning around a living area. Slope and orientation will always play an effect on zone planning. The image on the left of the photo is almost a “never in the real world” scenario, but the image on the right is more realistic.

As a starting point, the place of living is Zone O. Elements (such a the kitchen garden or semi permanent chicken coop) that are visited on a very consistent basis due to our needs and theirs, will be placed into this zone. Elements that need very little maintenance and time devoted to them (such as a wood lot for plank or pole timbers used for construction) are better placed in further out zones such as zone 4.