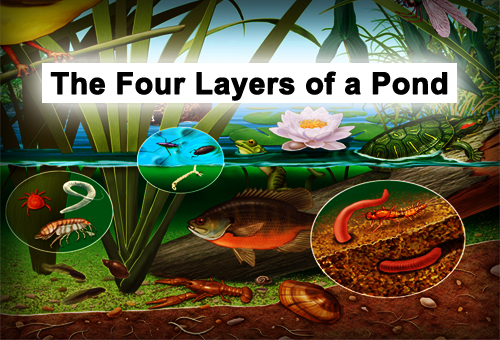 When studying permaculture at any depth it is easy to be empowered with information such as every forest in the world has seven layers (learn more), or that prairies are layered too (learn more). Since design and order is not exclusive to land systems, we can see the order of life in every pond or aquatic system.

The four layers of life in a pond:

Algae
Sunlight, water, and organic matter is all that is needed for algae to emerge abundantly. Algae is the base layer of life in an aquatic system.

Zooplankton
This layer feeds on the algae. It is an abundant category of life filled with a myriad of micro-organisms including single celled organisms such as protozoa to multicellular organisms of metazoan class. Most of them use water current as a mode of transport but some have locomotion to avoid predators.

Crustaceans
This layer feeds upon zooplankton and each other. Like zooplankton, this layer contains a multitude of species ranging from microarthropods to the Tasmanian giant freshwater crayfish (the largest freshwater invertebrate in the world).

Fish
This layer feeds upon all the other layers. There are only a few species of fish that can be recommended to put into a freshly built pond (learn more). Fish will always appear at a later stage naturally from incoming birds and the dormant fish eggs that have attached themselves to their legs.

A large enough puddle filled with water for a lengthy period of time will eventually fill itself with all these layers. However, we can speed this process up by adding a few buckets of pond muck from an already established pond.

Permaculture Tip of the Day - The 5 Layers of a Prairie

Permaculture Tip of the Day - Where is the Nitrogen in Legumes?